Single child and a game of Ludo

She was a little girl and did not have television at home, evenings were mostly a time for reflections. She used to have to drink a glass of milk just after coming back from outside play, wash her hands and feet and then sit with her homework and stuff. Her mother and father used to have their tea to drink and the day to share in between them. Overhearing the discussions of what the colleague of her father commented on the new project and about the information from her mother on what the neighbour's Aunt is knitting for her kid she was concentrating on solving her two rows of additions and subtractions. After mathematics there were words to learn for dictation and one page of Hindi handwriting. Her mother always re-checked her preparation for the dictation and audited all other home-work. Her mother accepted only neat hand writing and completed home work. Today she was quite satisfied. Her father also finished reading the news paper and was looking at them. She jumped when her mother said, "Okay thats fine for today and you can play something until the dinner time." She brought her one of the few board game to her parents, with expectant eyes looked at them. 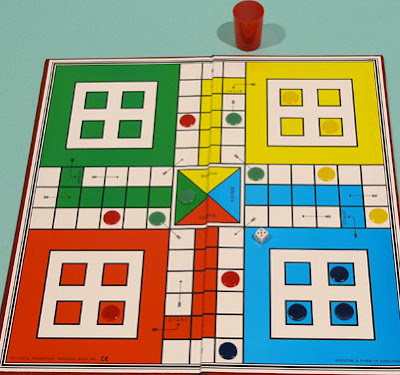 Both parents nodded in yes, and hence started the game of Ludo. Little girl always played with red disk pieces, one of the advantage of being only child. They started playing and yes, just like the last time she was not getting any six from her dice throw to start her game. Her parents on the other hand were all out  and all over the Ludo board. Her father as usual was making the winning noises and irritating her. Her mother was showing sympathy and was offering her to take the sixes she was getting from dice throw. "No, said the little girl, I am big now, I want a fair game." She tried her best and even when her discs were out but she was not able to win the game and then she could not stop herself anymore. It is never easy to accept a defeat and same is true in a game of Ludo when you play with your parents. Her eyes tried to be dry but failed and her parents encouraged her, told her that it was okay to loose once in a as other wise she would not be able to enjoy the victory. She did not understand that too well, but what else she could do other than waiting for next game of Ludo.

Some place else he, another single child; a little boy of the family also grew playing Ludo with his parents on some evenings and got lost. He made big fuss over her loss too and his parents cajoled him and told him that there would be always a next time.

Both are now grown up, faced many losses and in several points of a sport called life. They are a couple now and have a little daughter. They are busy parents, are well informed and well decked with several electronic gadgets. They don't get time to play Ludo with their kid. Their little girl is also too much involved with her gadgets, gizmos and friends.

That day, it was raining heavily and suddenly they found themselves playing Ludo with each other on a computer screen. The little girl was happy to play something together as a family and the adults were re-entering their childhood moments, unknowingly. The little girl lost the game, just like them several years ago, the little girl did not like it, she wanted to win badly at least from her parents. Her parents  knew exactly how it feels, they looked at each other and they jointly said,  Come on 'J', it is only a game and we are sure you will get many other chances to win."

As parents, both of them know now that it is essential to win in life but it is more necessary to loose and learn to accept it and move on, they wanted to pass the same knowledge to their only child, just like their parents did for them.
Posted by The Curator at 8:02 AM

Proud to be associated with

The Curator
In search of new ways while I toggle between family and career, east and west, science and rituals, achievements and compromises, meeting and farewells...