J is a picky and lazy eater. Each time she is given a new thing to eat, she would taste that with tip of her tongue. It is a funny visual and sometimes an irritating one specially when I prepare a dish keeping only her in mind. We had very hard time during her transition from bottles of milk to diverse solid food. She at the age of  1 and 1/2 years found no reason to come out of the comfort of just sucking milk from bottle or lick spoons of semi solid baby food with mild taste and swallow them immediately than to chew solid foods which were so complex in taste and texture. Result was an irritated and constipated child. Also now when I look back I find she was going to a German day care at that time and was taught to eat with utensils, where touching food with fingers was not a good manner. At home she found her Indian parents eating their food using fingers. J must have got confused seeing two ways of eating in that small age. Also the taste and texture of food was quite different in two places. Result, she got extremely picky about eating. We understood that and used to give her knife and fork to eat rice at home. This helped her. We also learnt to be consistent in giving her proper food and no baby food to develop her chewing and proper food eating habit.

At around age 3, she asked me once whether I feel messy to eat with fingers. I told her that no, it is just a habit. Also that there are some rules we follow, even if we eat with hands, like we use  only right hands, we use only fingers, we use chapatti (Indian bread) to scoop sabji and daal (curries and lenti; soup), there are countries other than India where also people eat with hands etc.  In the mean time, we, 'J's parents, big foodies, started including 'J' for cooking. She used to do simple acitvities like mixing things together. This broke her inhibitions of touching food with fingers. She started learning the names of different fruits and vegetables. She started to like the process of baking and so on. She still continues to taste any new thing with the tip of her tongue and she still continue to reject several vegetables (specially greens). She loved eating non-vegeterian items though. When she was 5, she asked me one day whether she could try eating food at home like us. She tried to eat rice with her fingers and as fingers are easy to use than fork and knife to mix food and Indian curries, she liked the taste of food better. Also with constant exposure to diverse food habits at school/day care and home she started accepting both and started picking some favourites of her own in both places. 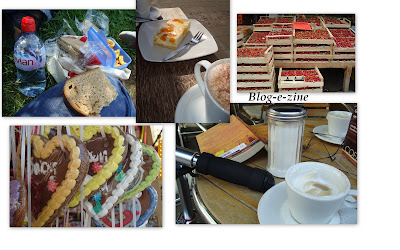 In this time she also started visiting her friend's house where she found that food was yet again different from her home and school. In spite of being picky, upon repetitive exposures she started choosing certain special food in her friend's house too. I started introducing the term 'acquired taste' in our regular language. I tried to explain her that there were several things I did not like to eat as a child, but as I grew old I started liking them. One example being cooked onions. 'J' found it funny that her 'food loving' mummy also had 'dislikes' as a kid. We kept watching food programmes talking about different types of international food and we kept buying and using several ingredients which are not that used in an Indian kitchen. 'J' started taking interest in several methods of cooking and used to come up with her 'own' ideas of cooking.

Recently upon our return to western part of India, she saw yet another world were vegetarian food are more common to consume. Geographically this region of India is land-locked and dry. So in earlier times the availability of fish and meat might be rare, legumes, fruits, vegetables and cereals are are major produces in these regions leading to vegetarian eating habit, which might have inoculated in the form of religious necessity as human being started creating faiths and religions for streamlined life.

Kids don't know all this reasons, they follow whatever they see at home, they get conditioned accordingly, so they form a critical view towards food not eaten in their home. 'J' on hearing the comments that 'eating fish or meat is yucky' got quite confused. She started showing her doubts towards chicken and fish curry which are her all time favourites. In her school non-vegeterian food is not allowed in the tiffin as they share food with each other adding more points to her doubts .

My parenting came under test again. Along with using the principle of 'acquired taste', I started talking with her about the geography and cultivation practice of different region or at least about the places where we have lived still now. This helped her understand that people in each place mostly eat what is grown there but as we unlike many others are always on move we get chance to explore different tastes. Secondly I started talking about various religions and how our belief  on religion also puts impact in our eating habits. She started understanding. We continued eating and cooking various tastes at our home and started exploring different restaurants. We started introducing new ingredients from the local markets in our cooking. 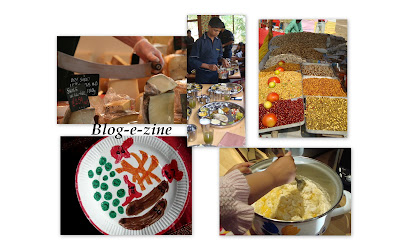 Recently I noticed that 'J' is finding it hard to eat at bigger gatherings, because of her being shy, because of all the excitement she goes through in such places, because of foreignness of the places and faces of people and because of she being not used to it and being picky, specially during festivals and big parties. Such gatherings (of almost 100 people and more) were not their in her life till now, as we were not in India till recently. We discussed on this issue and she said she was too tired to eat and she was although sad for her behaviour but she could not help it.

So my next journey will be to make her comfortable or at least accept the novelty of a situation that sometimes arises around food, and that where so many other people who are eating happily the same thing that has been offered to her, so she can try to taste the things with a smile and who knows she might find a new favourite for herself.
Posted by The Curator at 2:59 AM

Proud to be associated with

The Curator
In search of new ways while I toggle between family and career, east and west, science and rituals, achievements and compromises, meeting and farewells...